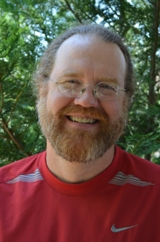 Carter comes to MDCS with a varied background. He obtained both a B.A. in English and an M.F.A. in Technical Theatre and Design from the University of Georgia. Before coming to MDCS, he worked in professional theatre and then for ten years as the sole proprietor of his custom metalworking business. He became involved with the creation of MDCS in February, 2001 serving on both the committee that wrote the charter application and the founding board that began the process of making the application a reality. He stepped in to serve as co-director in October, 2003 and has been a lead administrator at MDCS ever since. “It has been an indescribably rewarding experience to play an integral role in growing the school from an idea into one of the best public schools in the state.”

Unwilling to let the teachers have all of the fun, Carter teaches 8th grade computer skills, an internet publishing elective, and co-leads the 7th and 8th grade education outdoors offerings. “I really love leading the trip to Hazel Creek. It gets me out in the field for a week, provides me with another opportunity to see the vision come to life, and gives me a chance to share my passion for local history with the students.”

Carter currently lives in Bryson City with his wife, Ellen, and his youngest son, Holden, who will be a sophomore at Appalachian State this fall. Colyn, his oldest son, just graduated from UNC Asheville and is currently working his sixth season on a national park trail crew. Recently, Rocky Mountain National Park was his park of choice.