This year’s “big trip” came in October with a 3-day journey to Chattanooga, TN. We met several social studies and science curriculum goals while having a truly wonderful time together that heightened the class’ sense of community. This trip strengthened the idea that learning can indeed be fun!

Chattanooga offers a wide variety of educational learning opportunities. After our 3-hour drive we began by going to the Children’s Discovery Museum in downtown Chattanooga, not far from the Aquarium. There the kids dusted off dinosaur bones, experienced life as a disabled person, learned about pulleys and fulcrums and encased themselves in giant bubbles. 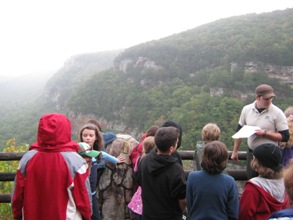 Ranger Anton and the class on Lookout Mtn 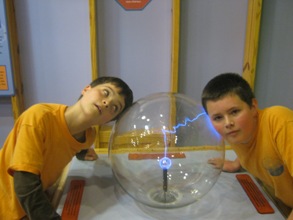 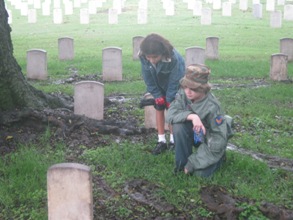 Logan and Tyler take in the cemetery 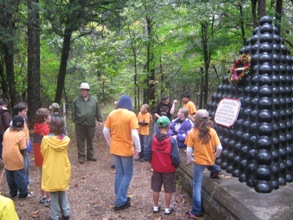 The class at one of the battlefields

We then set our sights on our home for the next 2 nights: Cloudland Canyon State Park in Georgia, just south of Chattanooga. This park has some of the most unique geologic features (landforms) seen in the region. We checked into our group lodge – where we found a very well-equipped kitchen although somewhat Spartan metal bunk beds and cinder block walls – but perfect for 5th graders on an adventure! The group was organized to help with meal preparation and clean-up and everyone looked after their own belongings. To channel our energy we had a pre-dinner game of Capture the Flag and a post-dinner campfire of reading the Girl in Blue, a Civil War story, and s’mores.

Day 2 saw us return to Chattanooga to tour the National Cemetery and silently walk among the thousands of gravestones of both Union and Confederate soldiers. The size of this section of the cemetery brought home the magnitude of deaths caused by this war. After lunch we drove to the Civil War battlefield called Chickamauga. We watched a movie at the Visitor’s Center and then took an hour-long guided tour of important battlefield sites. Ranger Anton painted a vivid picture of this bloody 1863 battle that gained the Union army a significant foothold in the western part of the Confederacy.

After returning to our lodge for another tasty dinner, we met Ranger Josh for a most interesting hike into the narrow canyon from which the park gets its name. We saw several impressive waterfalls created by the unique geology of the area and a location where early inhabitants sought shelter. After going back the Outdoor Education Center for a fossil discovery experience, we headed back to our lodge ready for rest with a full day under our belts.

We awoke to a wet, rainy morning on our final day. That didn’t prevent us from going to Point Park atop Lookout Mountain. In the face of a howling wind Ranger Anton described the desperate November 1863 Confederate attempt to hold the mountain in the face of a determined Union charge up the side of the mountain. Driving, rather than taking the planned hike, we stopped at the Craven House, a large residence that the Confederates used as a headquarters until driven off by Union soldiers. It was finally time to head home from our adventure knowing that the past 3 days had been full of active learning.